Driving to the Bryan Center at Duke University, Durham, North Carolina, yesterday for the film screening of Homeplace Under Fire, I passed farms along the way. An “Eggs for Sale” sign caught my eye, and I thought how fitting it was to pass through farm country on my way to the screening.  The documentary film focuses on Farm Advocates working to save America’s heartland in the 1980s and forward. 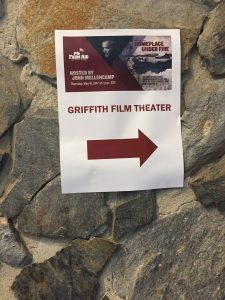 Homeplace Under Fire was publicly screened for the first time in Duke’s Griffith Film Theatre on May 18, 2017. Hosted by Charles D. Thompson, the film’s Director, and John Mellencamp, Farm Aid Co-founder, the documentary showing was followed by a Q&A session.

The Premiere started routinely enough. First, the audience heard a brief introduction to the Center for Documentary Studies, and its background in helping seed important community-oriented documentary projects. Then, Farm Aid Co-founder John Mellencamp was introduced, the speaker citing Mr. Mellencamp’s service to humanity and community through his music and art, and mentioning the recent release of his 23rd album, Sad Clowns & Hillbillies.

The tone was then set for Homeplace Under Fire, starting with background on the struggle of farm families, the Farm Advocates who rose up to help, and how Farm Aid came to support them.

Background started with Co-founder John Mellencamp — who in 1984 started seeing that towns near his birthplace of Seymour, Indiana, seemed to be disappearing. He didn’t understand what was happening, then discovered that the surrounding areas were “being run out of town” as it were. It was then he became involved in farm issues. Mellencamp received a call from Willie Nelson with similar concerns for America’s farmers. The result was the first Farm Aid concert (1985) to raise funds for farmers in trouble and the Farm Advocates helping them. As Carolyn Mugar of Farm Aid put it, the musicians basically decided, “We sing, we’re going to sing for people,” and Farm Aid was born.

This moving documentary packed quite a bit into its 30-minute run time.

Homeplace Under Fire begins with the Farm Crisis of the 80s, the decline — even attack — on family farms and the Farm Advocates who organized to assist farmers in keeping their lands. At a time when the government, lenders, and regulators were pushing farms to “get big or get out,” regular, rural folks stepped up and helped farmers navigate regulators, predatory lenders, and agencies geared toward taking farm land away and selling it. These “Farm Advocates” made a difference for farm families during the crises, and their work has never ended.

Parallels could be drawn to the millennium’s mortgage crisis, as the farm crisis of the 80s came about partly through lenders’ practices of encouraging farms be used as collateral on loans to provide working capital. Farmers expected their land to retain its value; however, a drop in land value combined — or caused by — lenders seizing and selling families’ land led to collapse. Values continued to drop and more farms were lost. For lenders, even those who purported to be farm supporters, the goal seemed to become to seize land and resell it. Thousands of farms were lost; the farm families lost their homes and livelihoods.

But there were regular folks who took it upon themselves to stand with the farmers, educated themselves on legal, regulatory, and financial rules, and helped educate farmers on their own rights and eligibilities. These few were the early Farm Advocates.

Throughout Homeplace Under Fire, Farm Advocates are introduced. Their stories of helping educate farmers and standing up for them with agencies like the Farmers Home Administration (FmHA). Watching the film, emotions rolled — from feeling the sadness of farm seizures and discriminating officials, to the rise of hope these advocates brought to farm families.

When the documentary ended and the lights came back on, it was humbling to see many of the advocates whose stories were told; they came from all around to sit on a panel and answer questions, right there in the Griffith Film Theatre.

Lou Anne Kling, one of the Farm Advocates featured in the documentary, passed away the day before the screening. Flowers in her honor adorned the stage.

For the next hour+, the panel talked about their lives helping farmers… work that continues today, long past the 1980s. Recent work in Nash County was mentioned, too, as farmers there face dangers of losing their land and livelihood. The panel answered audience questions and talked about how they helped farmers to feel seen. As one panel member put it, a crisis often drives people to anger, hatred, and bad things; but the farm advocacy group when facing the farm crisis had moved toward love.

Advocates shared personal stories of helping farmers facing discrimination and deception, of suicide and land loss, and of growing hope and community.

And, these seasoned Farm Advocates gave a warning. They are seeing that many of the same lending, corporate, and discriminatory factors are coming together now (2017) as they did in the 1980s. They warn that a second Farm Crisis is coming. The next generation of Farm Advocates is needed, now.

For those interested in helping and preserving American farms, advocates are needed to serve, to train, and to do what they can to help farms weather the coming storm. From the Homeplace Under Fire website:

A Farm Advocate is someone who works one-on-one with individual farmers to help them navigate the complex world of farm lending, state and federal regulations, contracts, and government programs in a way that increases their chance to stay on the land and be successful. A Farm Advocate helps to uncover injustice, bias or flawed servicing, and in doing so is able to identify opportunities for legal and political action at the systemic level.

To get involved, follow those links to find out more about becoming a Farm Advocate.

The Farm Advocates who brought farms through the 80s and beyond now need to pass their knowledge on to new Farm Advocates. This new generation is needed to help American family farms to weather the looming Farm Crisis.

If you care for family farms and the food they grow to feed this nation, I encourage you to see Homeplace Under Fire on its cross-country tour. When the documentary ends, see how you feel and if you want to become an advocate for the next generation’s farm families and farmland.

Future public screenings of Homeplace Under Fire are planned across the United States — including screenings planned for the small communities where these Farm Advocates work. Schedule will be forthcoming on the Homeplace Under Fire website. In the meantime, visit www.homeplaceunderfire.org to learn more about the Farm Advocates featured in the documentary.  If you want to bring the film to your community or organization, on that linked page you should see a button to “Bring The Film to Your Community”.

Also, I can’t say enough about how humbling and hopeful this documentary felt. After seeing it, I was inspired and immediately volunteered to help our local farmer’s market raise funds to stay open.

By Kay Whatley, Editor Three Colorado residents reported UFO sightings during the month of April. Photos available for two of them are nearly identical. The first sighting reported via the Mutual UFO Network (MUFON) occurred […]

Contributed by Brenda Lambert, Member www.paranormalchasers.com You may not think of your TV as something that would be considered “haunted”, but here I’ll tell you of my personal experience, and you may just change your mind. So, here I […]

In the North Pacific Ocean, several thousand miles West of Hawaii and East of the Philippines, lies the small island of Guam. In Guam, mice laced with acetaminophen are being air-dropped to control brown tree snakes. The US […]